Room 103 at Gleesons Roscommon is intriguingly named The Aleen Cust Room. Who was this lady with such an unusual name – and what is her connection to Roscommon?

Aleen Isabel Cust was the first female veterinary surgeon in Ireland and Britain. She was a trailblazer and a strong, resolute woman in both mind and body. Born in Tipperary in 1868 into an aristocratic family, Aleen’s world changed dramatically when she was ten years old and her father, Sir Leopold, died. Her mother, Lady Isabel, moved the family to London and took up a prestigious position in Queen Victoria’s royal household. Tall, big boned and strong, Aleen had entirely different interests, and from an early age was determined to be a vet.

Lady Isabel was equally determined that she should not, and threatened to ostracise her daughter if she followed her dream. Sadly, that is exactly what happened. The Royal College of Veterinary Surgeons (RCVS) in London refused her admission, but in 1895 a new college was opened in Edinburgh by Professor William Williams and Aleen was accepted. Her mother carried through on her threat and Aleen scraped by on a meagre allowance for her five years of study.

She was an exceptional and award-winning student but, despite an attempted legal challenge, the RCVS refused to let her sit the required examination or to qualify stating that it was ‘contrary to long usage and all precedent that women should be admitted to the veterinary profession’. She found herself in a quandary: highly capable and educated but unable to find a position. That’s where the Roscommon connection came in. Professor Williams knew a vet in Athleague, Roscommon named William Byrne and with a fine testimonial and letter of recommendation from the Professor, he agreed to employ the young lady.

Getting acceptance in Roscommon was also a challenge with dubious farmers and the parish priest getting castigating her from the pulpit. However, her ability began to change impressions and even the priest was convinced when she saved the life of one of his cows. Aleen and William Byrne proved to be an impressive veterinary team especially as equine vets. Aleen applied for and, on a vote of 14 to 10, secured a part time post of veterinary inspector with Galway County Council. Once again controversy arose from the RCVS, and as a compromise she was termed ‘inspector’.

Aleen’s story did not finish there, she joined the war effort during World War 1, first purchasing horses for action and then driving in her own car to the front in France to volunteer as a vet with the Army Veterinary and Remount Service.

In the post-war years things changed for the better in terms of equality between the sexes and in 1919 the all-important Sex Disqualification Act was passed. The RCVS could no longer refuse her membership and eventually in 1922 she received her diploma, a mere 22 years after completing her   veterinary course.

She retired to the New Forest in Hampshire around that time and lived surrounded by her beloved horses and dogs. In declining health, possibly because of her war activities, she went to Jamaica in 1936 to spend the winter with friends in a warmer climate. Sadly, she died suddenly three weeks later following a heart attack (and allegedly just 20 minutes after treating a local dog). Aleen Cust was just eight days short of her 69th birthday.

The veterinary surgeon William Byrne who believed in Aleen and made her career possible, is buried in the Church of Ireland graveyard in Roscommon town. Local historian and tour guide Marie Gillooly brings these and many more stories to life during her lively historical tours of Roscommon. Book a tour with Marie when you’re next staying at Gleesons Roscommon. 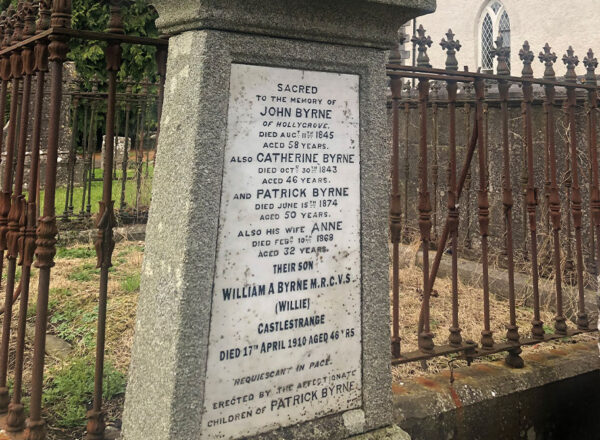